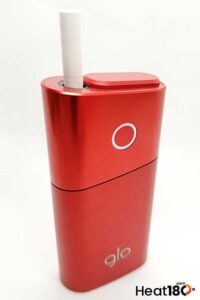 GLO Series 2 Mini was introduced as a smaller, more discreet GLO device, as one of the main complaints with previous GLO devices is that they were too bulky and looked awkward. While it definitely isn’t as big in size as GLO Series 2 or the original GLO, it’s not significantly smaller either. What’s even more disappointing is that while most GLO devices offer at least 40 consecutive uses, GLO Series 2 Mini offers only 15. It definitely is well-made and is good as a secondary device, but it’s several years old now and there are newer GLO models that might be a better choice. We recommend you check out GLO Pro or GLO Hyper instead.

QUALITY: Seems durable. Even more so since GLO devices don’t have blades which are sometimes a bit fragile. Instead GLO works with induction heating technology – simply put, the HeatStick is put in the heating chamber, then heated from all sides. Sort of like being in an oven. The rationale behind induction heating is that it heats more evenly and thus provides better flavor.

DESIGN: This device is just a smaller version of GLO Series 2. It looks sleek, albeit a bit awkward due to the boxy shape.

The GLO Mini kit includes the device, a Micro-B USB cable, a cleaning brush, the manual, and the warranty card.

When you open your kit, you’ll want to check the device charge. To do this press the control button once. The LED indicator lights that surround the control button will indicate what charge percentage is remaining. 4 lights on means there is more than 75% charge remaining, 3 lights is 75-50%, 2 lights is 50-25%, and only one light means less than 25% remaining. If you do need to charge your device, simply connect it to a power source.Charging should take no more than 1 hour and 5 minutes.

Since this is a multi-use device, you can start another cycle as soon as your first cycle ends. After approximately 15 uses the device must be charged again.

Since the heating occurs around the outside of the HeatStick the wrapper will have quite alot of discoloration. This is normal and nothing to be concerned about.

GLO devices do not need to be cleaned as often as some Heat-Not-Burn devices do, since they do not have heating blades. However, the manufacturer still recommends cleaning after every 20 cycles.

Cleaning is simple. Located at the bottom of the device, near the USB connector port, there is a cover with small holes in it. Pull the cover back so that the HeatSticks heating chamber is open from both ends. Insert the cleaning brush in either end and gently turn it in the chamber until the device feels/looks clean.

GLO’s brand of HeatSticks are called Neo or NeoStiks. NeoStiks are specifically designed for GLO products. They look a bit like a traditional cigarettes but are much thinner. The ingredient list for NeoStiks does not appear to be public nor does the percentage of nicotine in each stick. There are a few different types of NeoStiks and not all types are compatible with all devices. For more a full listing of NeoStik flavors click here.

GLO Mini has a 1-year warranty, unless extended by the user. In each kit, there should be a warranty card which will explain how to register the device for an extended warranty. In some countries, if you purchase the device off the official GLO website for that region, the device will already be pre-registered.

The warranty kit for this device does not explain in-depth the terms of the warranty, but GLO’s official website states that any damaged or defective devices will be exchanged so long as the company is informed within a “reasonable time after purchase.” Any devices that are damaged or defective must be shipped back to GLO. GLO will cover the cost of shipping unless the items are not covered by the warranty.

Don’t forget to comment and rate this device below!

What people say... Write your review
Order by:

Be the first to leave a review.

Your browser does not support images upload. Please choose a modern one

GLO Series 2 Mini was introduced as a smaller, more discreet GLO device. While it definitely isn’t as big in size as previous GLO products it’s not significantly smaller either.

GLO Pro has two unique settings (Standard and Boost) which allow you customize your experience. With these two settings you can change temperature, length of use, and heating time.

GLO Nano is new and flashy and looks completely unlike any GLO devices that came before it. But is it good enough that we recommend it? Unfortunately, no.